Looks like I haven't posted in about 2 weeks. In some ways it goes by quickly...and in others not so much.

Apparently I've been busy...though it's not much more than work and riding bike. A friend let me use his old road bike, a Novara Trionfo. He got it in about 1988/89. It has a steel frame, but weighs much less than my Buzz. It's been a lot of fun getting used to the bike and I've already put close to 100 miles on it in the last week. Definitely a different design than an urban commuter. When I stood up to pump the first time I just about sent myself over the handlebars!

I went downtown for the Tour de Fat hosted by New Belgium brewery. I ended up going to the wrong park first and then was too late when I did get there...oh well. Maybe next year or something.

I did get in a good ride and even was able to help a couple of people out with a flat tire on one of the trails. 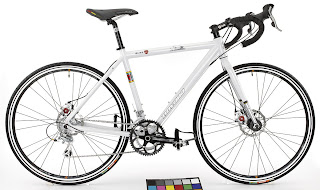 I have now surpassed the 400 mile mark on the Buzz bike. That is about 700 miles total on the bike. The distance seems to be adding up quickly so I need to make sure my cycle computer is working accurately...or maybe I'm just not paying enough attention to the amount I ride anymore.

I have been waiting to see the new bikes from Novara for 2009, and here is one of them...probably my next bike. The Buzz Road bike. A drop handle-bar urban bike with disk breaks. Pretty cool. Can't wait to try one out. I like the idea of a quick urban bike than can double as a road bike when I need it. My Buzz V is nice, but I don't like taking off the panniers or box when I want a faster, more agile bike for cruising around. I figure that is where the Buzz road would come in handy.

I have some more to talk about, but I am a bit tired and, with the weekend off, I have some time to write more tomorrow.
Posted by Buzz Commuter at 7:49 PM