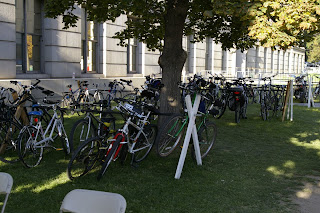 I kinda took the day off today. I only rode about 7 miles and went sailing instead of a big ride to let my legs rest a bit. The 7 miles was uphill on the way to my friend's house with the sail boat (catamaran to be more specific), but that meant a nice downhill on the way back after a morning of a little sailing on a local reservoir. The wind was calm...good thing since I've only been sailing once before. It was fun.

I'm including some photos from my ride in downtown Denver yesterday. The first photo is of the BikeDenver bike parking for the Taste of Denver or something like that. This was at round 5 or six in the afternoon. Not as full as earlier in the day, but people were still stopping in...what a great service. Definitely beats trying to park a car. Volunteers would check the bike in and out. Nice...I think I may have to volunteer for that too. 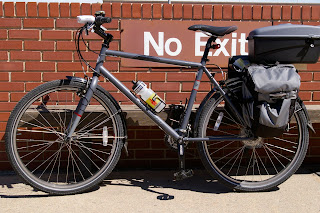 This next photo is of my bike. I like the sign in the background. I was just parking there to make some photographs when I turned around and noticed the sign. You can also see my new big box on the back. I got this so I could store my camera and some other stuff while I'm out and about. It's big (27 liters), but it seems to work ok. I had to use a piece of wood between the box and my rack to keep enough space to have my panniers. I can carry a lot for crap now. 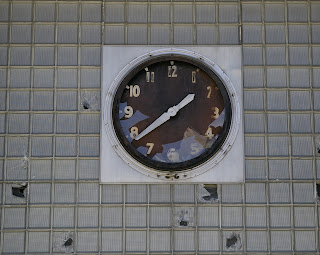 The last photo here is of this cool clock I saw as I was rising past an old industrial building just off Mississippi and Broadway in south Denver. It's broken of course, but a nice subject non-the-less. I hope to get some more photos in better light before it is gone as part of a reconstruction project for the area. It's too bad some of the old parts of the building can't be saved for the new construction. Maybe it will...still pretty cool. I really like the look of the old warehouse/industrial areas. There's something very historic about them like the ruins of a past age.
Posted by Buzz Commuter at 7:29 PM