Ride Civil - day 6 without a car 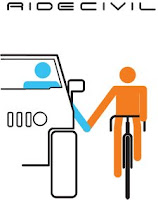 I'm coming up on my first week as a dedicated bike commuter. I had my first car ride in the last 6 days today to go climbing in the morning, but it wasn't my car. Makes me happy.

I was checking out Bike Hugger today and they offered the coolest thing...a great reminder to cyclists and motorists to watch out for one another...Ride Civil. Bike Hugger is offering the symbol created specifically in response to incidents in Seattle, NYC and other cities. You can read more on the web site.

It's a really great idea and I hope a lot of people take advantage of it. I can remember when Boise, Idaho attempted it's first critical mass demonstration. As great a symbol as many cyclists and their bikes coming together to create awareness, a lot of planning and thought has to go into the demonstration. Boise's critical mass was a great idea, but it didn't communicate the message of awareness it just pissed motorists off more than usual. People can get hurt and that's not the point...a critical mass is an attempt to communicate an awareness of cyclists to motorists. That was in 1998 or so...a lot has changed and Boise is a great place to cycle and bike commute.

Cyclists are vehicles too and they work hard to abide by the same laws that motorists must follow. Unfortunately cycling in traffic and on roads can create friction and even lead to injury or death. The real scary news is that cyclists can get injured while on bike paths too. Many bike paths...such as the 470 path here in Denver, CO, cross roads and intersections. If both the motorist and cyclist are not paying attention the absolute worst is possible. I'm sure we all know cars can do a lot more damage than a bike in a collusion.

Let's Ride Civil and keep an eye out for one another...many motorists are cyclists too. Sharing the road means a lot when I am not on a bike trail or lane.

A bit over 14 miles today...and possibly more.
Posted by Buzz Commuter at 8:17 PM